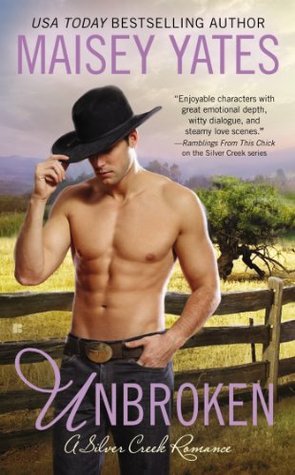 
In the latest Silver Creek romance from USA Today bestselling author Maisey Yates, former rodeo star Cade Mitchell may never ride again, but there are still a few things he can do—like care for the woman he loves.

Amber Johnson has always thought of her best friend Cade as an older brother. A really hot older brother. But growing up in foster care, she learned to rely only on herself. As much as she likes stealing glances at Cade’s chiseled jaw and painted-on jeans, she resents the way he swoops in like a superhero to fix things for her.


When former rodeo rival Jim Davis starts harassing Amber to sell her grandfather’s failing ranch, Cade swoops in once again. To send Jim on his way, Cade pretends to be Amber’s boyfriend, moving in to help fix the place up. With her grandfather behind the idea, Amber and Cade have to keep the charade going—whether she likes it or not.

But as their make-believe romance starts to heat up, maybe Cade and Amber will learn to admit that they both could use a little saving…

I went into Unbroken with very few expectations. It sounded like a good story, but I'd only read one Yates book (another series/publisher) before this and while it was fine, I wasn't exactly in love with it. I'm happy to say that I did enjoy Unbroken very much, and look forward to reading more of the Silver Creek series.

Unbroken is the perfect example of a good friends-to-lovers story. What made it special was the history between Amber and Cade, who'd been best friends for sixteen years. All those years were strictly platonic, with no suggestive words or actions between the two. Amber came to town after an entire short life of not being wanted. She challenged her newly-connected grandparents, and Silver Creek. The one person who initially got Amber was Cade. Cade came from a good family, but it was a family built on lies. Cade spent many years carrying his father's secrets, a burden he only unloaded with Amber. So, the author did excellent work at backing up this great friendship between Amber and Cade, and made me understand why neither wanted to risk it, despite their attraction to one another.

I know I've mentioned that I'm not into cowboys, but dang, I really liked Cade. I'm not sure if I'm changing, becoming more flexible in my book heroes, or if it's just this one in specific. The fact he wore a hat and a huge belt buckle (not my thing) actually didn't bother me. I will say that I know for sure that I liked Cade because he was kind of cranky and gruff. It's pretty understandable, given the fact that a severe rodeo injury left him in near-constant pain. But I'm pretty sure Cade was gruff before and I love that. Amber loved it, too, obviously. And she was such a great leading character, as well. I like how Yates gave us insights into her background, from being a promiscuous teen seeking a connection, to being a woman who's forgone that charade in an effort to be someone she's proud of. Amber and Cade's connection was strong, but it was also fun. The banter the two shared - a favorite part of a relationship, for me- was witty and held a great sarcastic tone, but still full of affection. I just really got these two, and wanted their happy ever after.

Good news: Unbroken is a two-fer! That's right, you get two romances for the price of one in this book. The second coming courtesy of a long-lost sister and the local bearded, flannel-wearing store owner (I know, right?). I almost wish this secondary story between Nicole and John hadn't been told because those two needed their own book. So, so good.

Unbroken was a really good read. I was on-board with the love story, loved the surprises that came along the way, enjoyed getting to know former series leads, and was sold on that ending. I want to go back and read the first books in the series now. It was steamy, funny, endearing and I definitely recommend it.


Favorite Quotes
"Why else would I move into that farmhouse she has and take on all those projects. Sex. And bacon. You can't overlook the bacon."
"When did this happen?"
"Is this what marriage does to people, Cole? Turns them into women? Are you honestly asking me for romantic details? There was a day when sex and cured meat would have been enough of an answer for you."
They were just kissing. Deeper and hungrier than she'd ever kissed anyone in her life. But still just kissing.
Just kissing that made her feel like the heavens had opened up and let fire rain down. Just kissing that made it seem like the world had tilted on its side and everything was completely, irreversibly different.
"Chivalry and sex. Tonight's gonna be good."
He turned then, and smiled, then he pushed her up against the wall, firm hands pinning her in place. "Very good," he said, angling his head and kissing the side of her neck. Gentle, his beard scratching her tender skin.
"Oh...wow." He moved away from her and went back to the door. "I think your facial hair has better moves than my ex."
"That bodes well."
"I think."
The Silver Creek Series

I have an extra ARC to give away! Must be 18+ years of age; open to US only.
a Rafflecopter giveaway

Maisey Yates found her very first Harlequin Presents book in a local thrift store. By the time she’d reached the happily ever after, she had fallen in love. She devoured as many as she could get her hands on after that, and she knew that these were the books she wanted to write! At age twenty-three, she sold her first manuscript to the Harlequin Presents line. Maisey lives in Southern Oregon with her husband and three children.