Review ~ What Happens in Vegas, Dies in Vegas by Mark Everett Stone 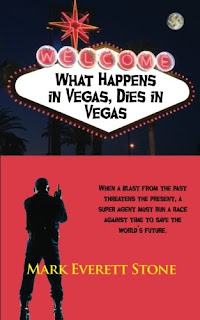 After faking his own death, Kal Hakala is free of the Bureau of Supernatural Investigation and can finally focus his energy on destroying the monster that murdered his sister. With the help of trusted former teammates, he embarks on a quest to find an artifact to activate a magical Tesla Coil, the only device powerful enough to kill a legend. But wherever Kal goes, trouble isn't far behind. It's not easy to locate an artifact without alerting the BSI. Kal narrows his search to Las Vegas, where he and his friends encounter the greatest peril ever to threaten our world--a threat found only in Sin City but rooted in World War II Germany, site of the past's most heinous crimes. Can Kal overcome an enemy so diabolical, so evil, that annihilating millions is merely one phase of its master plan? The task seems impossible, but for Kal Hakala, the best agent in the BSI's history, the impossible only requires patience and careful planning. Patience is not  Kal's strong suit. ~ From GoodReads

What Happens in Vegas, Dies in Vegas is the second installment in the From the Files of the BSI series by Mark Everett Stone.  I reviewed book one Things to Do in Denver When You're Undead (loved it), last summer. You can read that review here.

After the MAJOR shizz that went down at the end of book one, I was ready to find out what was coming up next for uber-hero Kal, the ultimate "man's man". Would he remain underground, hidden from the BSI? Would he finally get vengeance on the demon that killed his sister? Would he be able to keep delivering all the clever one-liners? The answers: Maybe, maybe and YES.

The dialogue, internal and verbal, is undoubtedly my favorite aspect of this series. Talk about a bunch of smart a$$es (meant as a compliment)! These people expend as much energy throwing verbal punches as they do kicking supernatural butt. The entertainment factor in the dialogue kept me speeding along with my reading, usually shaking my head as the characters always tried to one-up each other.

The continuous action, which served to consistently move the plot forward, was a lot broader than book one. The plot involved everything from fighting former co-workers and supernatural baddies, to time travelling and literally changing history. The story was broad, to say the least, and very interesting. But I found myself getting a tiny bit lost and having to re-read sections to make sure I was following.

What Happens in Vegas, Dies in Vegas served up a lot of resolution, intrigue, and creativity. I have absolutely no idea what the author is going to throw at Kal and company next. If you like your urban fantasy heavy on the action and thrills, and low on the romance factor, this one's for you.
Favorite Quote:

(Another character describing main character Kal)
"Sure he was hunky and all that with his mop of blond hair, Errol Flynn good looks and big muscles,
but he was a man obsessed with killing a Class Five Supernatural. So bent on revenge that it was an
obsession. He was Ahab, Khan, and Victor von Frankenstein all rolled up into one big, sexy package."

* I received this book from the author, in exchange for an honest review. *
Unknown at 12:06 AM
Share