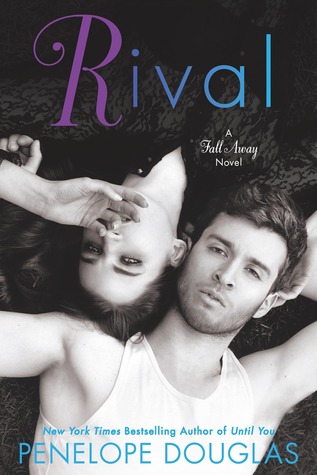 Madoc and Fallon. Two estranged teenagers playing games that push the boundaries between love and war…


For the two years she’s been away at boarding school, there was no word from her. Back when we lived in the same house, she used to cut me down during the day and then leave her door open for me at night.I was stupid then, but now I’m ready to beat her at her own game…


Two years and I can tell he still wants me, even if he acts like he’s better than me.But I won’t be scared away. Or pushed down. I’ll call his bluff and fight back. That’s what he wants, right? As long as I keep my guard up, he’ll never know how much he affects me….

To be honest, I probably wouldn't have given Rival much consideration if it hadnt been for a couple of chickies in my book group. They loved Bully and Until You, and both are super picky. I'm pretty weary of the bad boy-good girl YA/NA novels, but decided to trust my friends on this one. It paid off.

I didn't want to like Rival. I didn't want to like the characters, their drama, their angst. I know that angst, drama, and bad decisions is par for the course when it comes to teens. I mean, I was a wild child myself, and I'm not too keen on wallowing in all that again very often. I told myself I would give the book one hundred pages to pull me in, then I was done.

I didn't want to like Rival, and I ended up loving it. Relishing the story, rolling around in the drama and chaos like a happy little piglet. Penelope Douglas took these intensely messed-up kids with their chaotic lives, and she made me actually care about them.

Madoc and Falllon's story opens two years in the past, apparently somewhat concurrent with Jared and Tate's story in Bully (I think. I'm assuming here, since I haven't read that book). Madoc and Jared are horrible and I disliked them on site. Madoc is cruel to Fallon, and by the end of this section,it almost seems that he does something awful to her and she leaves town for two years. (Slight spoiler alert: he didn't) The story then picks up two years later, with Fallon's return, and she's set on revenge. Long story short,we learn that Fallon and Madoc shared an intense, somewhat happy relationship behind closed-doors before, but due to family circumstance (her mom is married to his dad-very unhappily), betrayal, being misled, and misunderstandings, they were torn apart.

It's young love, y'all! And it was GLORIOUS.

Rival was intense, so passionate. It was a bit of a mind f*ck for me because I honestly didn't know who or what to believe. Does Madoc care for Fallon, or was she a piece of ass? Will Fallon bring his world down to get her revenge, or does she have her sights somewhere else? And what happened while she was away? Appearances are not what they seem in Rival. There's a thin line between love and hate here, and the lightbulb moment, the moment I realized "Ohhhh. These two don't hate each other. The fcking love each other!" was awesome. Whereas I thought I was getting a story about these awful kids who had more money than brains, I got an intensely passionate love story between two kids who'd been done so wrong. The story completely pulled me in, forced me to frantically turn the pages, and did not let me go until the last word. And then I collapsed into an exhausted, exhilarated heap.


Rival was terrific. It's not often that I'm forced to love a story, but when I do, it's an amazing thing.

I kept my voice low and soft, trying to reach her. "You act like you have no heart, like you just swallow your conscience with all of the pain you cause. But I see through it, Fallon. The truth is, you want me like nobody's business." She closed her mouth and swallowed. "You've always wanted me. You know why? Because I don't try kill your demons. I run with them."

But when she started to unbutton my pants, I grabbed her hand. "Not yet," I whispered, snatching her bottom lip between my teeth. She tasted like vanilla and warmth and home. I couldn't imagine ever being hungry for anything else but her.


I'd stopped growing up when Fallon left.
And I started again when she came home.
You have to have something to love.

The Fall Away Series

Penelope Douglas is a writer living in Las Vegas with her husband and daughter. She is the author of the New York Times and USA Today Bestsellers BULLY and UNTIL YOU. Look for the next book in the series, RIVAL, coming August 26, 2014.
Twitter  |  Facebook  |  GoodReads  |  Pinterest