Review: Lay It Down (Desert Dogs #1) by Cara McKenna 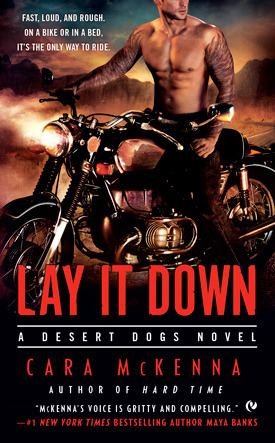 Backbreaking days, wild nights, and the hard hum of steel between your thighs...

That’s a life well lived, according to the Desert Dogs—four friends who call Fortuity, Nevada, their badlands home. Vince Grossier is the self-crowned outlaw king around here. But when Fortuity’s slick new mayor invites a shady casino development to town, the invaders’ cutthroat takeover tactics quickly turn deadly. With police turning a suspiciously blind eye, it’s up to the locals to fight back, and Vince is on the front line. The pretty photographer hired by the developers might be the key to infiltrating the enemy. And a temptation too good to pass up.

Finally free of a controlling ex, Kim Paget’s not looking to be taken for a ride—not on the back of some tattooed roughneck’s bike and definitely not in his bed. But when she finds evidence that her bosses are rattlesnake-dangerous, Kim must entrust her safety to the man who threatens danger of a whole different kind.


My Review
No one will be more surprised than me that I did not love Lay It Down. I don't even personally know of another reader who was more anxious to read this book. It's possible that my expectations were too high, but I honestly don't think that's it. As much as I wanted to love this book, I didn't.
Here's why...
Cara McKenna is a master at writing stories with a bit of quirk. It can be that the character has an unexpected kink, personality or occupation. Or they story might revolve around an unusual circumstance. Whatever it is, I go into a McKenna book just knowing there will be some sort of hook that will have me dying of giddy as I read. Lay It Down didn't have that. It was mainstream, which is fine. I'm sure that this novel will find a huge audience for that very reason. But for some reason, deserved or not, I just felt somewhat let down.
Lay It Down is not an MC book. And fine, that doesn't really bother me, and it's not promised in the book description, but.... it's kind of implied. A lot of readers are going to look at that cover and assume. Vince Grossier is a dude who just happens to ride a bike while trying to solve a murder mystery and get into his favorite gal's pants.
Lay It Down read like a cross between a modern-day western and romantic suspense. The story is set in northern Nevada, with the townspeople, led by Vince, dismayed over a casino development. There's a lot of talk about the red dirt and quarries and shafts (not the fun kind). Though it's actually fit the story, it didn't turn my crank. The same for the romantic suspense element. There's an old murder, a new possible murder and bad guys who'll stop at nothing to get their way. The story does not end on a true cliffhanger, but there seems to be a big series arc. I just don't have a lot of luck with the sub-genre.
Something I love about McKenna's other work is her ability to make me believe in a couple, despite impossibilities. I've believed in a hermit alcoholic with a penchant for ropes and his sweet lady love. I've believed in a Parisian male prostitute and his virgin lover. I've always felt that connection. With Kim and Vince, I totally bought the physical, but didn't really understand why exactly they fell in love.
There's an element of magical realism in Lay It Down, and it just didn't work for me. Vince's mom and his brother both have "the sight". They're able to predict the future and it does play an important role in the story, at least on the mom's end. I don't know, it felt unnecessary, to me.
As long as I'm wearing my tightest pair of rantypants, let me just add one more issue. I love the swears. I use the swears a lot in real life. I like to mix things up which means I vary my swears. But geez, it felt like every other sentence started with the word "Goddamn..." I mean, I get it, it's a great swear word but what about the other greats? They were vastly underused. I swear, I got so annoyed that my eye started twitching every time another sentence started with that word.
Okay. I know this review is coming off as pretty negative, but I did like Lay It Down well enough. The main characters were fairly engaging, as were the secondary characters. I'm hoping future books will focus on different leads, particularly Rayna and Vince's brother Case. The story was interesting, it just didn't pull me in. My favorite part, to no one's surprise, was the sex. McKenna is always stellar at the physical interactions between her characters, and Lay It Down was no exception.
So. Do I recommend Lay It Down? I do, but long-time McKenna fans should be prepared for something completely different.

Favorite Quotes
She spoke to his throat, watching the pulse tick there. "I want you to know, you're the most obnoxious man I've ever met."
He nodded thoughtfully, looking not at all surprised. "That's why I dialed back my usual wooing tactics."
"You banged a guy named Vince... Holy shit. That is so awesome. Are you his old lady now? Do you have to get his name tattooed on your cleavage?"
"He's not in a gang you spaz. Though he is on parole..."
A pause. Jesus Christ, Kimbo. I don't think I've seen you go through a major breakup before, but when you're in the market for a bad-idea rebound, you do not fuck around."
"Apparently not."
"You're my new hero. Tell me everything."

Cara McKenna writes smart erotica—sexy stories with depth. A little dark, a little funny, always emotional. She also writes red-hot romance under the name Meg Maguire. Her wonderful publishers are Ellora's Cave, Harlequin Blaze, Loose-Id, Penguin / Intermix, and Samhain. She loves writing sexy, character-driven stories about strong-willed men and women who keep each other on their toes, and bring one another to their knees.

Cara is represented by Laura Bradford, of the Bradford Literary Agency.

Before becoming a purveyor of red-hot romance and smart erotica, Cara was a record store bitch, a lousy barista, a decent designer, and an overly enthusiastic penguin handler.

Cara now writes full-time and lives north of Boston with her bearded husband. When she's not trapped in her own head she can usually be found in the kitchen, the coffee shop, or jogging around the nearest duck-filled pond. She is a very proud member of the Romance Writers of America® and her local New England Chapter.