Welcome to my stop on the Kill Devil Hills blog tour. My stop includes a review, teasers and giveaway. Thanks for stopping by! 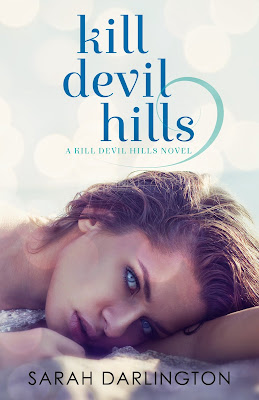 
His life is exactly the way he’s always wanted it to be...stable.She’s quite possibly the very definition of unstable.

Noah saved her.Georgina never wanted to be saved.Growing up, Noah Clark was passed from one relative to the next until he finally ended up living with his abusive, alcoholic uncle in Kill Devil Hills, North Carolina. Thanks in part to the unwavering love and support of his best friend, Ellie Turner, Noah survived those years, escaped his uncle, and grew into the man he is today. Now he runs his own business and lives a pretty normal, no-nonsense life—one where he maintains a high level of control.

Georgina is Ellie’s younger sister. Four months ago, Noah saved Georgie’s life, but he thought that was where his involvement with his friend’s sister would end. Now Georgie has returned home from the recovery facility her parents sent her away to and Noah, still haunted by the night that connects them, can’t stop himself from continuously trying to protect this girl he barely knows. But is he willing to give up all of the control he’s worked so hard to build in his life and risk everything for her? Even more importantly, would she do the same for him?


My Short and Sweet...
You know when you read a book and you like it, but don't have a ton to say about it? Yeah. That's me with Kill Devil Hills. But while my review is very short, don't let that lead you to believe that I didn't like it. I did!
Kill Devil Hills had an attention-grabbing beginning-seriously!- but at the heart of it, was a simple and sweet love story. We have the broken girl Georgie, who's gone through a terrible loss, and the guy of her dreams, her older sister's best friend Noah. I found their story to be fairly understated, and really, not to heavy on the drama or anst. Very straighforward. The shocking opening cuts off, then skips ahead several months later. I would have liked to experienced Georgie's recovery, and think that would have helped me believe more in her strength and ability to handle life.
I really liked the relationship between Georgie and Noah, once they get past the awkward and random sleeping together situation (Noah sleeps over with her sister in the basement, and Georgie just climbs in with him), I found them to be endearing. Theirs is a relationship that can be best described as peaceful and comforting, meaning they find the best peace and comfort in one another. I like that!
Kill Devil Hills was a pretty good start to the series. I'm very interested to see where it goes next. Personally, I think it would be fantastic to have a story about Georgie's sister Ellie (Noah's best friend), who is gay. I guess we'll see! 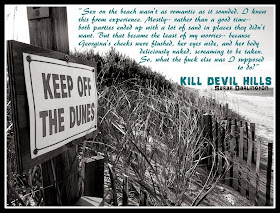 
Also by Sarah: HE BELONGS WITH ME

Sarah Darlington lives in Virginia with her husband and crazy-active 2-year-old son. She’s a former flight attendant, day-dreamer, traveler, and wannabe photographer. Her debut novel HE BELONGS WITH ME, a standalone, was released March 2014. KILL DEVIL HILLS will be the first book of a three book series. Each novel in this new series will feature a different couple's story.