RERELEASE DAY GIVEAWAY ~ IF YOU STAY by COURTNEY COLE

Today marks the re-release of If You Stay (Beautifully Broken #1) by Courtney Cole! This edition has a new, slightly different cover, and bonus material! You can learn more about a contest hosted by the publisher, AND there's a GIVEAWAY!
Check it out...
Series: Beautifully Broken #1
Genre: Contemporary New Adult
Publisher: Forever (Grand Central Publishing)

Twenty-four-year-old Pax Tate is an asshole. Seriously. He's a tattooed, rock-hard bad boy with a tough attitude to match. His mother died when Pax was seven, leaving a hole in his heart filled with an intense guilt that he doesn't understand. What he does know is that he and his dad were left alone, and they have never been close. Now, he uses drugs and women to cope with the black void in his soul. He pretends that the emptiness isn't there and this has always worked . . . until he meets Mila.


Sweet, beautiful Mila Hill is the fresh air that Pax has never known in his life. He doesn't know how to not hurt her¿but he quickly realizes that he'd better figure it out because he needs her to breathe. When the memories of his mother's death resurface to haunt Pax, Mila is there to save him from his overwhelming guilt. Mila restores his broken heart, even as she evokes his powerful, sexual desires. Now for Pax to keep Mila, he needs to work on his issuesand stop being an asshole. But is that enough to make her stay? 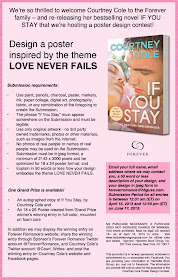 GIVEAWAY
a Rafflecopter giveaway
About the author:

Courtney Cole is a novelist who would eat mythology for breakfast if she could. She has a degree in Business, but has since discovered that corporate America is not nearly as fun to live in as fictional worlds. She loves chocolate and roller coasters and hates waiting and rude people.
Courtney lives in quiet suburbia, close to Lake Michigan, with her real-life Prince Charming, her ornery kids (there is a small chance that they get their orneriness from their mother) and a small domestic zoo.