I'm happy to be taking part in the cover reveal for Stay, by S. Mulholland. There is also an excerpt, so be sure to check that out. This reveal was coordinated by Amanda "Hootie" at Globug and Hootie Need a Book. 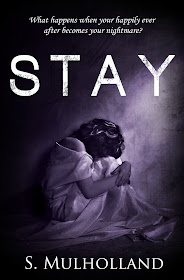 Category/Genre: New Adult Contemporary
Publication Date: Spring 2013
Eighteen year old Alexandra has finally made it out of her abusive mother’s house alive, now going to St. Norbert College in the small town she grew up in; she wants to experience living her own life, free of abuse, but on the night she meets Jason Roberts; her fate has something different in mind.

Alexandra and Jason have a strong connection but the closer she gets to him, the further he shuts her out. This doesn’t stop Alexandra’s heart from falling in love with Jason and she fears that he might not feel the same way about her. Jason holds a lot of mystery and secrets that Alexandra tries to figure out but on a night when they are to meet, he never shows up, leaving her to mourn the loss of his absence.

Months later, he returns to tell her he’ll never be able to be with her the way that she wants to be with him. Hurt for the second time by the man she loves, Alexandra decides to move on with her life with what others told her to be “the perfect man”, Zac Millington, but as time goes by she realizes that things were never as they seemed…as he seemed.

If you had the opportunity to change what becomes your worst nightmare, would you take the chance to change it or pretend like that nightmare is what’s meant to be?

Stay is a romantic depiction of how two people that are meant to be together are torn apart by the one thing they both have in common. As they both go through their own versions of abuse, will they be able to stay after finally finding each other again?


“Are you sure this is the right house? Looks empty.”

I say breaking the silence between us. He lets go of my hand and peeks through the window on the door. There’s obviously nobody here. It’s dark as hell in there.

“Shit. They told me to come a long time ago; I guess I took too long. I’m sorry; I thought for sure I would be able to turn your early night into a long one.”

He says turning around to face me.

I can see his eyes now because of the light on the back porch and they look like sapphire blue…just deep blue eyes that are intense and intimidating. It seems as though he can see right through me with those piercing eyes of his so I get fidgety again. He obviously knows I’m staring at him. God, I have to get away from this guy, I am a blabbering and fidgety idiot in front of him. I don’t know how much more I can embarrass myself.

“No biggie. This is actually the most fun I’ve had all night, so I should be thanking you, Jason…uh....Jason..?” I ask because I want to know his last name to make sure I stalk him on the internet. Wow I’m a tool.

“Roberts. Jason Roberts” He responds with a smirk.

“Well Jason Roberts. Would you like to walk me to my dorm room so that I can start my early night?”

I say with a voice that’s supposed to be flirty but I think sounds more like I’m a nervous wreck, which I am, but he doesn’t have to know that. I look down at my feet because that was the worst attempt at flirting.

I feel the intensity of his eyes on me “of course, Alexandra….Alexandra….uh…?”

I look up at his smiling face “Angel…Alex Angel”

I return his smile.

“Nice. Interesting name. I like it, Alexandra Angel…shall we?”

About the author:
I was born in Honduras but raised in Green Bay, Wisconsin from a very early age. I went to St. Norbert College in De Pere, WI before joining the U.S. Navy in 2006. After my short career in the military, I got married and started having kids. I have two munchkins now J I’ve been a stay at home mom for a couple of years.

This past Christmas, my husband got a Nook Color as a gift and he never got to use it because it was always glued to my hands. I never liked reading but once I picked up that Nook—I was addicted. So I’ve read a TON of books and it’s become my getaway. I started writing as a hobby but after I finished Stay, my husband encouraged me to get out there…so here I am. I love listening to music and find it inspirational and I think that it goes hand in hand with writing.
Connect at:
Facebook  |  GoodReads  |  Twitter  |  Blog  |  Pinterest