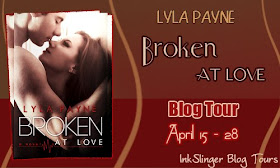 Welcome to my stop on the Broken at Love Blog Tour! The tour is being hosted by Inkslinger PR Blog Tours. My stop includes a review, Top Ten post from Lyla Payne, and tour giveaway.

When a knee injury ends twenty-year-old Quinn Rowland’s pro tennis career, he’s not only dumped by his hot Russian girlfriend but ordered to attend college by his disinterested billionaire father. A rich kid who’s not used to being disappointed by life, Quinn and his sociopathic half-brother Sebastian create a frat house game intended to treat girls how they see them—as simple game pieces to be manipulated for their pleasure.

College sophomore Emilie Swanson knows Quinn’s reputation—after all, he did send one of her sorority sisters into therapy earlier in the semester—but the game and his charm bring them closer together and soon she starts to believe there’s more to Quinn than people think.

But what if the more is something darker than a game of toying with emotions and breaking hearts?

Quinn and Emilie might be falling for each other, but there are secrets he’s not ready to tell—and lifestyle changes he’s reluctant to make. She willingly stepped on the court, but if Emilie finds out she started out as nothing as a pawn in Quinn and Sebastian’s twisted game, she might never forgive him.

To his surprise, Quinn finds that he might finally care about someone more than he cares about himself…even if that means letting Emilie walk away for good.

With a spirited heroine, a deliciously bad "bad boy" and a wicked game of hearts, Broken at Love is a story that will surprise, delight, and steal your heart.

THIS BOOK. From the moment I read that synopsis, I had to have it. When the time came to get started on it, I was in the mood for some angst and heat. And that is exactly what I got.

The best way I can describe Broken at Love is that it has a very strong Cruel Intentions vibe (minus the step-siblings in lust part). If, like me, you fell in love with Cruel Intentions as a teen (Ryan Phillipp...yum), then that is basically all the incentive you need to pick this book up. If you do not know this iconic movie, fix that immediately.

Broken at Love revolves around a game, set around the major pro tennis tournaments. Quinn Rowland is the player, led along by his evil half-brother Sebastian *shudders*. In each tournament there is a "top-seed" girl, Quinn's target of Sebastian's choosing. Quinn's objective is to get the girl in bed, and admit she cares for him before the end of the tournament. The guys involved even bet on Quinn's odd of winning (hint: he always wins).

I did not want to like Quinn, and I'll admit, I was set on hating him from the start. He is not a good guy, at all. The cruelness with which he breaks the girls was shocking. I thought to myself, "Oh no, here is another clichéd bad boy". Author Lyla Payne, though, did such an amazing job of making Quinn into such a sympathetic character. Once the layers are peeled backed, Quinn's life is heartbreaking and I could completely see why Emilie found him worthy of her love. I'll warn you though, there are a lot of layers to Quinn, and they're not easy to pull back. He infuriated me more than once, and at points I hated him. But I managed to somehow keep the faith.

Emilie was fantastic. I loved that she wasn't an innocent, naïve girl who basically let Quinn stomp all over her. She was such a spirited, strong-willed character, with a huge heart. Her ability to keep believing that Quinn could be the man she felt he was capable of being was inspiring. I don't know that I would put myself through the heartbreak she did. It has always hurt my heart to see a girl I know subject herself to humiliation and cruelty because she believed she could be the one to heal the guy she cares about. Emilie's willingness to keep putting herself out there, was brave, yet it hurt my heart, too. I will say that Emilie tried to always smart, believing that Quinn was worthy, but not willing to break herself to heal him.

Broken at Love was a really good, really gripping story, and Lyla Payne's writing was simply gorgeous. At times, the prose was surprising in it's beauty, and I found myself reading the book at a much slower pace than usual, truly letting myself absorb the words. I really enjoyed this book, and cannot wait for the next Whitman University book.

"What are you doing her with him? You made me promise we wouldn't even tell anyone we went to his party, then you kissed him and went back to his house and kissed him again, and then--"
"Hey, it was more than kissing," Quinn interrupted. When I gave him a look he shrugged. "What? You're not telling it right. It was hot, Ruby. Hot."
She shook her head at him. "You are annoying and strange. It's weird that I want to rip your clothes off and slap you at the same time."
"I get that a lot."
Ruby snorted. "I've heard."  ~eARC 35%

Emilie's presence in my life had helped me start to gather the pieces inside of me that should have been a whole.  It's a though my heart had spent the first twenty years of my life scattered in chunks, and every minute we spent together helped me find one more and paste it back in place.  ~eARC, 79%

Being asked to write about my Top 10 Bad Boys (or Girls) of tennis may be my favorite guest blog post topic ever. I could go vintage, with a classic bad boy like John McEnroe, Jimmy Connors, or Andre Agassi, but truthfully, I’ve only been a massive tennis fan for about the past seven or eight years, so I’ll stick with the players I know.


The funny thing about the term “bad boy” is that different people have different definitions. Does he have tattoos, or like to party, or does he sleep around, or maybe he just has a smart mouth?

One of my favorite things about the sport of tennis is its inherent level of class. It began as an upper class pastime, and with a few notable (usually American) exceptions, the players today come from money and good families. So, while tennis certainly has its fair share of the bad boys, they’re typically more reserved and understated in their bad-ness.

Which, for me, makes them all the more sexy. A pretty, cultured exterior with that streak of naughtiness running underneath just gives me delicious shivers.

So, here we go (in no particular order):

1. Marat Safin (Russia) – This guy was almost before my time, but I caught the tail end of his career and also his sister Dinara was on the rise when my tennis interest sparked, so I heard the tales. Wrecked hotel rooms, booze, epic meltdowns on court…Marat was (is) generally regarded as someone who might not only be a bad boy, but actually chemically imbalanced.

2. Serena Williams (USA) – Anyone who knows me knows that I am not a fan of Serena Williams. To me, her bad girl behavior crosses the line from amusing and secretly sexy to disrespectful and, let’s face it, scary. She’s one of the most sanctioned women on the WTA for her cursing and general verbal abuse of referees, and she never acknowledges any wrongdoing.

3. Fernando Verdasco (Spain) – The Spanish tennis team (my favorites, although the French are making a strong push to take their place) has more than its fair share of bad boys, but Verdasco probably tops the list. He’s super handsome, loves to party, and I’m pretty sure has slept with more of the girls on the tour than he hasn’t. *tips hat*

4. Bernie Tomic (Australia) – Tennis has a new, young, Aussie in town, and boy, does Bernie Tomic love his new status. He’s an up and coming star in Australia who loves fast cars, breaking the rules, hot women, and good parties—and hey, who wouldn’t have taken advantage of all those things if you were nineteen and on top of the world?

5. Maria Sharapova (Russia) – Maria makes my list because of her smart mouth and her general I don’t give a shit what you think about me attitude. I admire it. (Plus, look at her. I’m sure her pretty hair/gorgeous face/rockin bod/millions of dollars brings plenty of boys to the yard).

6. Andy Roddick (USA) – Another smartass makes the list! Andy Roddick was notorious for giving the press a hard time during post-match interviews, and his willingness to say what everyone is thinking, no matter how harsh, makes him one of my favorite tennis bad boys. He’s similarly playful with his fellow players, often doing impressions and mocking them during practices and exhibition play, making him the player everyone loved and yet, didn’t want to see on the opposite side of the net.

7. Victoria Azarenka (Belarus) – Vika makes my list for less adorable reasons—anyone who is willing to basically cheat to win a match has to be on the bad girl list, even if she’s not one that people enjoy watching. Vika wants to win, and she’ll do whatever it takes, even if it means faking an injury on court to ice her opponent. She’s a great player, and I think fans really want to love her, but she doesn’t give us many reasons to root for her. Bad Victoria.

8. Ernests Gulbis (Latvia) – Ah, Ernests. This boy loves women and partying so much that he decided he’d rather do that than play tennis, and the once promising star saw his ranking slip over the last couple of years. He claims he’s seen the error of his ways and 2013 will be the year of his comeback, but all of us ladies are secretly hoping he hasn’t gone totally good, right?

9. Novak Djokovic (Serbia) – Nole used to be more of a classic bad boy—pissing people off with his attitude, muttering rude comments under his breath on court, and totally unable to maintain his cool during a match. These days, he’s relaxed more than a little and taken a page from Roddick’s book of maturation, and Nole has become one of my favorite players to watch. He’s full of smiles, smartass remarks, and practical jokes that make him more of an reformed bad boy, but I still love him.

10. David Ferrer (Spain) – Another Spaniard who loves booze, parties, and ladies! Ferrer takes advantage of his money and status to live life to the fullest, and I’m sure there’s a trail of broken hearts and hangovers in his wake. Personally, I wouldn’t mind finding out. *wink*


So, that’s it for me! If you’re a tennis fan, sound off in the comments! Who did I leave out?

**So much "badness"! Thanks to Lyla for this fabulous post!**

About the author
I've long had a love of stories. A few years ago I decided to put them down on the page, and even though I have a degree in film and television, novels were the creative outlet where I found a home. When the idea for Broken at Love (my first New Adult title) arrived, I couldn’t wait to try something new – and I'm hooked. In my spare time, I watch a ton of tennis (no surprise, there), play a ton of tennis, and dedicate a good portion of brain power to dreaming up the next fictitious bad boy we’d all love to meet in real life.