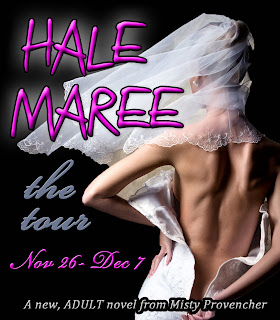 Welcome to The Bookish Babe's stop on the Hale Maree Blog Tour! I am so, so excited to have been asked to take part in this tour. My stop includes my review of Hale Maree, tour-wide Giveaway, along with a teaser from Misty's upcoming book, Mercy. You can find the complete tour schedule here.


GENRE: ADULT CONTEMPORARY ROMANCE
Please be advised that this book is NOT suitable for Young Adult readers due to language and explicit sexual situations.

Hale Simmons dreams of climbing out of her impoverished life, going to college, and getting herself a titanium crash helmet, so she can eventually bust through the Plexiglas ceiling of her crappy life. But for now, she’s just a 18-year-old girl with a flimsy hope, barely getting by with her alcoholic father, Jerry.
But for Hale, ‘crappy’ suddenly takes a nosedive, when Jerry becomes the sole witness to a horrible accident. It is an event which means to effect everyone, especially Hale, who wasn’t even involved.
While the depth of the accident has just begun to unfold, Otto Maree, a prominent business man and old family friend, stands to lose everything because of it. Otto is desperate for Hale’s father to stay quiet about what occurred the night the two men met for a drink. Out of mutual moments of desperation, the two fathers forge a deal. Jerry is desperate to gain financial stability for both himself and Hale, and Otto Maree is more than willing to pay to keep his secret just that.
But deals like this need to be made of the strongest vows and bound with the most faithful of loyalties. Otto proposes a marriage between Hale and his playboy-son, Oscar, in order to assure that the secret remains ‘in the family’. The mystery surrounding the accident continues to grow and Hale struggles against her own mysterious feelings that begin to develop for Oscar, who turns out to less of a playboy, but just as fiercely loyal and dedicated as his father.
As the pressure around her continues to escalate, Hale realizes that she’s got to decide if this arranged marriage is really just a big mistake or an amazing twist of fate that has been waiting around for this particular accident to happen.

A fun, romantic, and emotional story of a couple who get pushed into the "deep end" of love.

Hale Maree is a story I'd been looking forward to reading from the moment I read the synopsis. Seriously, an arranged marriage in the US in 2012? I was so curious to meet heroine Hale Simmons (love that name!) and sexy playboy Oscar.

It's not often that you find a contemporary story with an "arranged marriage" plotline. I, for one, was very intrigued, and I wondered how in the world Provencher would make this work. But if there's one thing that you learn about her writing after reading the Keystone series, it's that Provencher always covers all her plot bases. As I read the story, I would stop to ask "Well, what about...?", and within moments, that question was being explained. The reason Hale's and Oscar's fathers need them to get married actually makes a lot of sense. I appreciate that we aren't just given this crazy, outlandish reason and are forced to swallow it.

Besides the arranged marriage, I also had reservations about Hale and Oscar. If they jumped into the situation with both feet, eager and happy, I would have found the whole thing unbelievable. If they both acted hatefully towards one another because of their unhappiness over a situation neither can control, I would have likely found them irritating. Though Oscar and Hale are thrown into this awkward/insane situation, Provencher really takes her time with the build-up between the characters. More than anything, this story is the slow, sweet creation of the relationship between Hale and Oscar.

Hale is understandably upset. She feels as if her father has basically sold her out. She doesn't know what is expected of her. She's confused, upset, and angry. I love that Hale realizes that Oscar isn't to blame, and that she doesn't place it with him. But, Hale does not make it easy for Oscar. He must work, be patient to earn her trust. You really see the fun side, and get some insight into Hale's thoughts when she talks with her best friend, Sher. And I want to just say now, I would so be down with a story about Sher.

Oscar was nearly pitch perfect as the resigned son who wants to protect his father. Oscar isn't exactly happy about the situation, but he is decidedly optimistic. It's almost as if you can sense in him that he feels instantly drawn to Hale, and will do whatever it takes to make her happy with the situation. Oscar treats Hale like a skittish colt, slowly draws her in and earns her trust. I loved that he was kind, thoughtful, and gentle with Hale. But wow, when Oscar turns up the heat, look out! That boy is smokin'. Hale Maree had loads of sensual, steamy moments, slowly building up to a hot, hot, hot scene that makes me want to knock out my ceiling and put in skylights. Nicely done.

Hale Maree was ultimately a fun story that kept me reeled in until the very end. It was so funny at moments, dangerously alluring and surprising mysterious. Hale Maree is a great choice if you're looking for a romance that's out-of-the norm, and gets it done right.


Edited to add: I have come across several comments about the cover of Hale Maree that mention how thin the cover model looks. I actually never thought anything about it, other than "Oh hey, I love how her veil is blowing to the side!" In the story, Hale is a petite young woman. There are a lot of women out there who are naturally very thin. Many, some whom I have known personally, were taunted and made to feel ugly and ashamed. Many are as hurt/offended about comments about their looks as an overweight woman does. I think most of us would agree that commenting that the cover model could stand to lose a few pounds would be cruel, and would never do that. Be kind.

"I would notice you, Hale," he continues, "if you walked into a room behind a 500 pound lion that was charging straight for me. I would notice you if the room were full of naked women, and I was in deep conversation about my own death. I will always come running, I'll eat the dinner and wear the shirts and I've already thought that if you put on ten more pounds, it'd be a sure bet that I would never let you out of my bed. I've been trying to soak up every word you've said since the first time we spoke, so I think it's only fair that you try just as hard to hear me now. I think you are perfect for me, Hale, and I'm just waiting for you to realize that I'm perfect for you too."  (33%)


"Oh my God, you're getting married! I'm going to be your bridesmaid! I can't believe it!" Sher's screaming. She's so excited that I was to just float along on the whole fairy tale with her.
"Nice, bestie," I mumble at her, trying to press down my smile. "Whose friend are you anyway?"
"Yours!" she squeals. "And his!" I think I love him already!"
Oscar struts across the room. "My mission here is complete," he says, as he reaches the top of the stairs. He flashes me the peace sign."Ocker, out."   (41%)


"Will you?" Oscar asks again, removing the ring. He takes my hand, and slips the ring onto my finger. "Say yes. Please, Hale. Not just because we're supposed to, but because you think you might actually love me."   (65%)


You can purchase Hale Maree at:
Amazon | Barnes & Noble | Smashwords

And now, an excerpt from Misty's next book, Mercy, A Gargoyle Story.

My will to survive is the first thing to drown.


I know, because I hold it under myself.


After facing severe tragedy in life, Madeline assumes her death will be easy.


But the angels do not come to take her to Heaven.


Instead, what retrieves her is something she never expected: a gargoyle.


Delivered to Truce, the King of the Gargoyles, Madeline now has choices she never wanted.  She has the ability to take over the entire Gargoyle Kingdom, if she is willing to kill the king.  However, looking to prevent takeover, Truce transforms Madeline, thereby granting her the ability to achieve the thing she wants most—death—if she can just find the human recipient for the Gargoyle Gift that she now has to give.  It should be easy.


But lives, whether they are lived or not, are seldom simple, and Madeline’s past still stands in her way. Now, only a voyeur in the life of The Boy with the Golden Rod Voice, Madeline’s must reconcile her own life and death, if she ever hopes to have free reign of her soul.

"It was a clear decline, Moaguza,” Truce says, but the gargoyle growls again.
"Let the darling steep," the gargoyle hisses.  "Have it’s chances against your tongue.  Time to choose once it knows it’s choices.  And if the choice does not want what I need, then I will labor on, my King, in your perilous fate."
"Fair enough, but of the temptation," Truce says,  "we may be able to have this temptation, without change to our path.”
“That is not a choice.  You do not want what you need," the gargoyle whines.  “You must give the choices.”
“With one concession, then.  Let's see what becomes of it in good form, shall we?”
"It can not bring wanting.  Unfair.  Unfair!”
"I continue to disagree, yet there is nothing we can do, to prove which of us is right, aside from testing the theory.  I cannot remove the desire, but we shall test the wanting.  Get to your wings, Moag."
The gargoyle groans, but it stands.  The thing spreads its emaciated bat wings against the sky, until the entire, eroding turret is eclipsed in its shadow.
"Ready?" the King asks, but his tone leaves no room for dispute.
"Yes," the gargoyle grumbles.  Truce holds both hands toward me, palms out, and the underside of his silver-ensconced fingers wink and slither.  He keeps his head down.
"Rot!" he roars, and at the same moment, the gargoyle's fierce wings give a hard downbeat, as its claws snatch me off the castle top and carry me away once more.

There are two fantastic tour-wide giveaways. Just fill out the Rafflecopter forms.