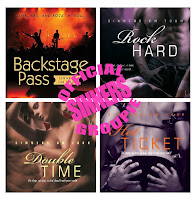 You guys. I am DYING here! I am so, so thrilled to be taking part in the Double Time Blog Tour, brought to you by Sourcebooks Casablanca. I kid you not, I sort of squealed when I got the invite to join the tour! I am a huge fan of the series and of author Olivia Cunning. In fact, Sinners on Tour is one of my very favorite series ever and Olivia is on my "Auto-Buy" author list. My stop on the tour includes an interview with the lovely, talented Olivia Cunning, and a GIVEAWAY.

Olivia Cunning delivers the perfect blend of steamy sex, heartwarming romance, and a wicked sense of humor in this menage story featuring the hottest guy in the Sinners band.

Trey Mills, the notoriously sexy Sinners rhythm guitarist, gives up his bisexual lifestyle and is swept into a hot, heady romance with Reagan Elliot, a female rock star sensation. But when Trey encounters Reagan's sexy bisexual roommate, Ethan Conner, he can no longer deny who he is or what he wants. Reagan heartily agrees to a solution that opens up a hot new world of sexual experience--and love--with the two men she wants the most.

My review of Double Time
You can purchase Double Time at:
Amazon | Barnes & Noble | Book Depository

Combining her love for romantic fiction and rock ‘n roll, Olivia Cunning writes erotic romance centered around rock musicians. Raised on hard rock music from the cradle, she attended her first Styx concert at age six and fell instantly in love with live music. She's been known to travel over a thousand miles just to see a favorite band in concert. As a teen, she discovered her second love, romantic fiction -- first, voraciously reading steamy romance novels and then penning her own. Growing up as the daughter of a career soldier, she's lived all over the country and overseas. She recently moved to Galveston, Texas.
Connect with Olivia Cunning at:
Website | Blog  |  Facebook | Twitter  |  GoodReads
Giveaway
I have one copy of Double Time to give away, courtesy of Sourcebooks. I can say that Double Time is a fantastic and the winner will be one lucky person. I've been known to stare lovingly at my copy from time to time. ;-)
Rules:

Thank you to Sourcebooks for asking me to take part in the Double Time Blog Tour.