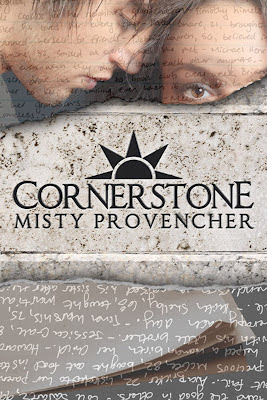 
Nalena Maxwell has been branded ‘The Waste’ at her new school, due to her mom's obsessive paper hoarding. Nalena desperately wants something to change in her life, but when she receives a sign (and it's the wrong dang one) inviting her into a mysterious, ancient community, too much changes. What she knew of her family, what she thought of her life and what she believed about her future, is no longer applicable. Seventeen years worth of family skeletons come crashing into Nalena's life and it is the boy...the one that smiles at her like he wants to hear everything she'll ever say...that already knows her powerful secrets. But it is only Nalena that can choose between protecting the life that is already crumbling beneath her feet and the one that might sacrifice everything she could ever have.

Why I Chose to Read Cornerstone: When author Misty Provencher contacted me about reviewing the series, I was instantly curious. Then I took a look at the reviews on GoodReads, and the praise blew me away.

A fascinating story built around ancient memories, those who transcribe and protect them, and the never ending quest for peace and knowledge. Cornerstone begins as the story of Nalena, a girl who is tolerant, but socially ostracized because of her mother's eccentricities. Convinced that no one will ever see beyond the stacks of paper that consume her house, and her life, Nalena wants to be invisible to those who taunt her. But one person refuses to see through her, Garrett Reese. Garrett seems interested in knowing Nalena. The more she's around Garrett, the harder it becomes to remain invisible. When Nalena begins to notice remarkable changes in herself, and is harmed by an unknown person, she discovers that her mother may not be "crazy" and that Garrett Reese knows more about her than she ever imagined.

Going into Cornerstone, I had absolutely no idea of what to expect with the paranormal element. And honestly, I don't even honestly know what to say about it in my review. I don't want to go into all the details. I feel as if that would be spoiling the story, and taking half the fun in reading Cornerstone away. I will say that I have never read a story quite like this one. The paranormal is something completely unique to any book I've read before. Provencher does an excellent job of laying it out in such a way that it is detailed, smart, well-explained.

Cornerstone has an amazing cast of characters. Nalena is a girl that I just want to wrap up in love. She is a good daughter, always tolerant of her mother's quirks. She's a smart girl, she knows how to protect herself, especially her heart. When the hottest guy in school notices her, she's surprised and flattered, but is careful because of the torment she's endured. I love that she didn't throw herself at Garrett's feet; she makes him prove his worth. The further the story moves along, the more I loved Nalena.

I honestly felt sorry for Evangeline, Nalena's mom. She honestly wants the best for her daughter, but seems to be the source of all of her problems. But Evangeline has some serious secrets, and though I wish she would've been more upfront with her daughter, I can understand the need to keep your child safe. The Reese family was awesome. They were loud, loving, and loyal. I loved their closeness, their humor.

So...I have to swoon a little bit about Garrett. OhMyGosh! He was Perfect! Garrett is kind, caring, attentive, intelligent, athletic, supportive, and did I mention GORGEOUS? I have to admit, I'm crushing pretty hard on the poor guy. It's hard to find a balance of perfect without becoming boring or cheesy, but Provencher did a perfect job with Garrett. He's one of my new favorite Book Boyfriends.

I have to say, the ending of Cornerstone sucker punched me in the heart. I was shocked, saddened, and sobbing. And boy is Misty lucky that I had book two, Keystone, loaded and ready to go on my Kindle!

Cornerstone is an intricate, beautiful story that will appeal to your logic, and your heart.

"His gaze is centered and lazy, like he's been watching me for a while. His expression doesn't change when our eyes lock, even though I can feel the muscles in my forehead suddenly hike toward my scalp. It's like he's been studying me and doesn't care if I know it." (6%)

"It feels like we are talking even though we aren't a communication traveling between us in soft, comfortable molecules. I let myself watch him when he looks away, tracing the shadow of his facial hair from the high edge of his jaw, below his cheekbones, until it parts around his mouth. I let my interest rest on his lips. I don't know how long I am lost in studying them, their curve and color, but Garrett's sudden grin throws my gaze up into his eyes and I turn what I assume is a purplish shade of humiliated." (43%)

"I want this second of my life, filled with the muted chords and the silver twilight, to go on forever. I want his shadow to come closer, to lean in so I feel the heat of his body like a blanket on my skin. I want him to kiss me." (52%) 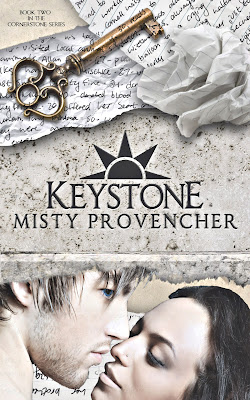 
There’s a man-made storm coming, like a rip in the world, and it’s called the Cusp.

Struggling to fit into the destiny she’s accepted, Nalena Maxwell has been left with one objective: she must find her murdered grandfather’s Memory. Stolen and hidden away by her own father over seventeen years ago, the Memory could be the key to ending the Cusp and destroying the Ianua’s rival community, The Fury.

Driven by each individual’s selfish desires, The Fury has always lacked the loyalty and organization it needs to be an actual force of power.

Someone masterminded the Fury’s massive attack on the Ianua, slaughtering twelve of their thirteen community leaders, the Addos. Now there are rumors that the 13th Cura, to which Nali belongs, has gone to the Fury, manipulating the last Addo in order to control the other 12 Curas.

As the Cusp brings the Fury and their own communities against them, Nalena’s Cura must preserve the Ianua, but finding the key to the Cusp isn’t as simple as it seems.

I'm finding it impossible to say everything I want about Keystone without revealing too much or spoiling Cornerstone. Where the story in Cornerstone was about the revelation of this secret society and the relationship between Nalena and Garrett, Keystone is mostly action. Nalena is tasked with a huge mission, one that's personal to her, and is filled with physical consequences and emotional impact. Keystone does not fall into the stagnant storyline scenario that a lot of second books in a series seem to land in, the story is continuously moving the characters forward.

We still have the pleasure of  the Garrett and Nalena's love story, though, and I have to say, their relationship is pretty spectacular. Everytime I (and okay, Nalena, too) think this sweet, sensitive boy can't be any more perfect, one warm glance or melting smile, written to brilliant, heart-stopping detail by Provencher, reduced me to a simpering pile of swoon.

Keystone, like Cornerstone, has a great secondary cast. The Reeses, though more subdued, were still a delight. Little brothers Brandon and Mark were perfect for comic relief. As is the Addo and Zane. Zaneena, Robin, Milo, and Deeta were more characters that were introduced, and each helped make the story feel alive.


Keystone was a fantastic follow-up to Cornerstone.  The story alternately broke and filled my heart. Misty Provencher has such a gift for words that strike me with their simple, beautiful impact. I am completely in love with the Cornerstone series and can't wait for the next installment.

"I'm the one he sees first, standing at my chair, one bare foot layered on the other and peeking out from the bottom of my gown.
His bottom lip dips open. That's all it takes for him to make me beautiful. His eyes travel up from my feet, his brow lifting, until his gaze locks on mine. He whispers a word so softly I only see it on his lips. We sit together and he leans toward me, like he is going to whisper the word so I can hear it this time, but instead, he whispers an entire sentence across my cheek.
'You are absolutely stunning,' is what he says." (14%)


"The way he looks at me, his eyes widen and his lips open like he's going to say something, but doesn't. He takes a breath instead. And he stares a second before the wisp of a grin catches up tickles both our lips. It's like he's never seen me before. I want him to look at me like this every single time I walk into a room for the rest of my life." (38%)

You can purchase Keystone at:
Amazon | Barnes & Noble |  Smashwords