It’s the summer of 1974 and 21-year old Dawn Emerson has only three things she wants to do: compete one last time in the Ellensburg Rodeo, win back her ex-boyfriend Ryan, and become the best damn music journalist at Central Washington University. But all her plans are left in the dust when she’s contacted by Creem magazine to go on the road with one of her favorite groups, the up-and-coming metal band, Hybrid.

At first the assignment reads like a dream come true. Not only will Dawn land some much-needed credibility as a female music journalist, but she’ll finally get to experience life from the other side of the stage, and maybe crack the drunken, enigmatic code that is guitarist Sage Knightly. Instead, Dawn finds herself on an aging tour bus filled with ego-maniacs, band politics and a whole lot of sex, drugs and rock n’ roll. When monsters start showing up in dressing rooms and some of Sage’s groupies become increasingly strange and dangerous, Dawn discovers the band is not only going places – they’re going straight to Hell.

And Dawn has a backstage pass.

The Devil's Metal is the first book in a two-part New Adult Horror/Paranormal Romance and very (very!) loosely based on the author's exploits as a music journalist. Hell comes in different forms.

A Twisted Tale of Sex, Drugs, and Rock and Roll

Aspiring music journalist Dawn Emerson is offered a once in a lifetime opportunity: Tour with her favorite band, Hybrid. Wanting to earn a credible reputation, Dawn strives to get her story, but stay above the scandalous adventures the band has behind the scenes. The lure of drugs and seduction is hard to resist, particularly when it's offered by your idols. Day by day, Dawn becomes closer to the band, and even begins to join them in the fun. But soon enough, the demons come out to play, and people begin to die. Turns out, someone made a dangerous deal to secure Hybrid's place in the music industry, and it's time to pay up.

The best way I can describe The Devil's Metal is... Almost Famous with demons. Sounds incredibly strange, yes? Much like that iconic movie, you have a young protagonist (but in this case, older and female) touring with her favorite band, in an effort to get the "big" story, and make a name for herself as a music journalist. Because I consider Almost Famous one of the best movies ever, and because I'm obsessed with music, this story held automatic appeal for me. If The Devil's Metal had been simply that story, I would have been fine with that.

But, this isn't simply that story. This is also the story of a band that paid a steep price for success. A price that is now being collected. Karina Halle is fantastic at delivering the creepy. I'm a huge fan of all her books, surprising since I don't typically read or watch horror. But I find her style works for me. It's scary enough to give me the heebie-jeebies, but not so much that I'm tempted to sleep with a steak knife under my pillow.

I tend to like my books with a contemporary setting. I usually find myself annoyed by the constant references that are meant to remind me of the specific time in which the story is set. The exception are books set in the 1990s (THE BEST!!) and 1980s. The 1970s are my hard limit. This era is doable; any further back and I'm done. The fact that The Devil's Metal is set in the 1970s means that you  get tragic fashion and decor, but rad music. Due to the very thorough inclusion of the era's lingo, trends, and pop culture, Karina Halle gives the reader an authentic look at at that place in time.And truly, from a rock history stand point, the story is fascinating.

From beginning to end, I found The Devil's Metal to be a very good book. The story had a fairly solid resolution. The Prologue, however, delivered another big dose of WTF, and you better believe that I'll be on board for book two.

The Devil's Metal is another solid, unique story from the very gifted Karina Halle.


"During that show I forgot all about the talk I had with Robbie earlier, or the unexpected sass I delivered to Sage. I was just a fan, always a fan, a worshipper who talked to God in her head but fell to her knees at church." (eARC, 31%)


"He patted the top of my head gently with his hand, his expression melancholic. 'Are you here? Right now? There are different ways to run away and I know them all. Whatever you run from will always find you.' " (eARC, 36%)

You can purchase The Devil's Metal at:
Amazon  |  Smashwords 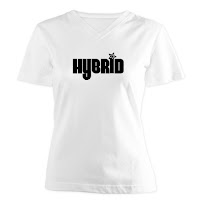