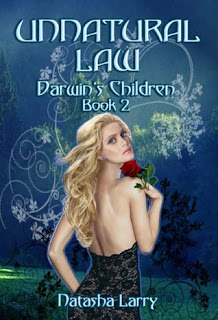 Seventeen-year-old Jaycie Lerner’s psychokinetic power surge is over, and her astounding powers are under control for the time being – sort of. As she struggles to maintain her humanity in the face of the awesome terror and responsibility of her abilities, she also yearns for the chance at a normal life – and a relationship with Matt Carter, the best friend she had to leave behind. But Matt’s got a few tricks up his sleeve, and he’s not about to give up on his feelings for Jaycie.

As Jaycie and her family grapple with the day-to-day routine of trying to keep their world together, Jaycie’s mother figure, Allison Young, endures a personal crisis of her own. The superhuman blonde possesses the physical equivalent of Jaycie’s awesome psychic power. So evolved, at ninety-two she still looks twenty. But what good is extended life when everyone else around her is so fragile? With no one to share her unusual life, she’s a uniquely lonely woman yearning for the romantic love she sees all around her. But in a dream she gets her wish – and it quickly turns to a nightmare for everyone else in her life. The memory of a rose is all she can hold onto in the storm of obsession that nearly sweeps her away.

Things quickly turn deadly for the vampires, but the Dey-Vah Guard fairies refuse to acknowledge there’s an imbalance in the nature they protect. As the danger gets ever closer to Jaycie and her family, the race is on to find answers before a secret plot can destroy them all. ~From GoodReads

Unnatural Law, by Natasha Larry, is a strong follow-up to book one in the series, Darwin's Children. Teen phenom Jaycie Lerner has been dominated by a surge in her powers, rendering her vulnerable to the overwhelming force of her own mind and body.  Her family, made up of her father and closest friends, lifelong and new, are coping with the fallout of Jaycie's surge, and there to help control her. Her closest friend-turned boyfriend, Matt, just wants to know what's happening to the girl he loves. Add in a mix of vampires and fairies, all vying for power and control, and you have a recipe for an exciting, powerful story!

When I first began this series last summer, I was very hesitant. This story reminded me of what the X-Men might be like. Well, what it might be like if I had actually watched the movies or read the comics. That type of story isn't always my thing. But the author's technique of  gradually building the fantasy elements into the plot, along with the conversational, easy tone of the story, quickly eased my fears and turned me into a fan of this series.

To be honest, I was afraid of what would happen in Unnatural Law. I am a huge Jaycie fan, and was afraid of what would happen if she was no longer the focus of the story. And though a few characters, namely Allison, the closest person Jaycie has to a mother, do have larger roles, this series still has Jaycie as it's main focus. And, oh boy. I was so, SO happy Matt played a HUGE role in Unnatural Law! Guys is young adult fiction do not come any better than Matt. He's eerily almost perfect, but never annoying. Matt is tenacious when it comes to Jaycie and supportive to the max. Score one for the good guys! The growing relationship between Matt and Jaycie was my absolute favorite part of the book.

I said it before, when I reviewed Darwin's Children, and I'll say it again: This is a series that will appeal to your intelligence. The concepts Larry puts to work, regarding evolution and the abilities of the body, especially the brain, will appeal to those who love creativity and intelligence in their books. But believe me, it's written to be not as complicated as that sounds. So, if you like your books with heart and a huge dose of intelligence, this series is most definitely for you.

"Jaycie looked up at the ceiling and laughed at all this new information. 'Now I have concrete, scientific data that says Matt is the perfect guy. Not just for me, but for every woman on the planet. The frickin' genesis.' "   (pg. 49)


Kindle Edition
Published October 26th 2011 by Penumbra Publishing
You can purchase Unnatural Law at:
Amazon  |  Book Depository  |  Barnes & Noble
*I received a copy of Unnatural Law from the author, in exchange for an honest review.*
Unknown at 9:27 PM
Share