Welcome!
Today is an exciting day at The Bookish Babes. I am so happy to be hosting the opening day of the SHIFT BLOG TOUR. MR Merrick, the fantastic author of SHIFT is here with a guest post about his writing process, but to be honest, I don't know how he finds time to write with all of the cereal eating and hashtag slinging he does! But anyway...stick around after the guest post for my review of SHIFT, book two in The Protector series.

What difference was there in writing Shift, versus Exiled?
Short Answer: Everything.

But I suspect you’re not looking for the short answer .

The first thing you should know is that I didn’t use an outline for Exiled. I just wrote, and I didn’t stop until I thought this part of the story was over. Writing by the seat of your pants is fun, in fact, it’s sort of a neat experience, but it makes for more work later. You have to go back and patch up plot holes you started but never took anywhere, and there’s a lot of smoothing out to do as far as character development. When you start writing without an outline, you don’t really know who these people are, but as the story progresses, the layers get peeled back. So writing without a plot, you experience the book much like a reader would; only the story is in its roughest form.
With Exiled, I had to rewrite the dialogue and some of the actions of Chase for the first four chapters, because he became someone completely different as the story progressed. He took shape and turned into a “real” person. But, when I was done, there was still something that wasn’t there. The story was done, but it was missing a piece. I found it in the other dimension, Drakar, that Chase, Rayna, and Tiki travel too. I went back later and added a ton to that part of the book and it turned out to be the best part of the story – in my opinion. I added in the trolls, more of the scenery, and built the world up in a bigger way. I expanded the last chapter and rewrote the epilogue time and time again, until I truly felt the story was complete. Then it was a matter of editing and smoothing out the flow, wording, and pacing of everything to prepare it for the rest of the world.

With SHIFT, everything was easier. I had a detailed outline, so I knew the story before I started page one. The world – for the most part – had already been created, the rules were laid out, and I knew what needed to be done. I was a machine writing Shift. Multiple times I pushed out over 10,000 words in a single night, and to my surprise, most of them weren’t garbage. For anyone reading this who isn’t a writer, that’s A LOT.

I knew from some of the reviews of Exiled that readers loved to read about the other dimensions, and I loved writing about them. Before I started, I had already developed the new dimension for Shift. I’d already created the monsters in my mind, what they looked like, what they were capable of, and where they would be in the story. I knew from the general series outline what needed to be accomplished, I knew exactly what was going to happen to each character, and how the story would end.

My craft has improved so much since I published Exiled, that everything just seemed…easier with Shift. At least that’s what I’m telling myself. Maybe I haven’t gotten to be a better writer; maybe this story just came naturally to me. The one thing I learned from Shift is that for me, using an outline changed everything. That being said, when I start the new series that’s brewing in my imagination, I’m not sure I’ll use one for the first book. In writing SHIFT, I did struggle for a short while, because I was trying to the following the outline like a rule book. I had to stop that. The outline was my guide and sometimes, the story took me elsewhere. Once I let it, everything else fell into place. When I start the new series, I might have to let the words spill on the page until the story comes out, then go back and clean it up, like I did with Exiled. Or, I could write an outline and now that I know it’s just a guide, go from there. Which way things go has yet to be seen.

Thanks Andrea for letting me take over your blog today, and for being the FIRST stop on the SHIFT blog tour!

Thank you, Matt, for stopping by! It's always a pleasure taking a trip through your brain.

M.R. Merrick is a Canadian writer, and author of Exiled, the first installment in The Protector Series. Having never travelled, he adventures to far off lands through his imagination and in between cups of coffee. As a music lover and proud breakfast enthusiast, he's usually found at the computer, between a pair of headphones and in front of a large bowl of cereal.


(The SHIFT synopsis contains an EXILED spoiler!!)
My review of EXILED 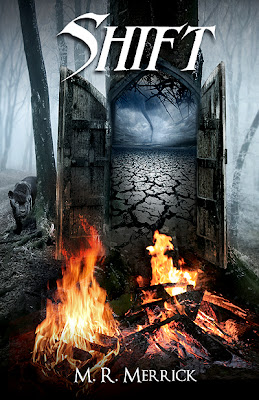 As Chase struggles to control his magic, his enemies are closing in. Everyone has staked a claim on his ring, and destroying it may be his only chance to stop Riley. But Chase must decide if stopping him is worth risking the lives of everyone he cares about, or if protecting the ring will be enough to save his world. ~From GoodReads

What's "IT", you ask? The "IT" to which I am referring is the fact the he has written another action-packed, exhilarating, tension-riddled monster of a book!

Main character Chase Williams is still reeling over the tragic event that marked the end of Exiled, book one in The Protector series. He is grief-stricken and bound by guilt, and most certainly not in a happy place at the opening of Shift. But even the loss he has experienced and the continuous revelations can bring Chase down. With the power he controls, his trademark wit, and his patchwork family, Chase Williams is never down for the count.
This family, the individual pieces that make the whole, are fun and amazing. Marcus, Chase's mentor, is struggling to lead and guide them down their dangerous path, all while battling his own grief and guilt. Willy, who seems to have stolen the readers' hearts (mine included), is back, and still the Willy we know and love, with a surprising, but very well-played, turn to his storyline. The change to Willy's story definitely becomes a game-changer and makes Willy more integral to the story than I would have imagined when I first "met" him. The two characters that I had the most fun with were Tiki and Vincent. I won't get into all of the reasons I enjoyed these characters, that's best left to the reading experience, but I will say that so many of the scenes with those two involved the so glamorous "snort-laugh" by yours truly.

My favorite character in Shift, hands down, was Rayna. This surprised me. I enjoyed Rayna in Exiled, but I loved her in Shift. She had already undergone so many painful events in her life before we met her. Now, she is fighting painful transformations. Transformations that can actually end her life. And as if her physical battles aren't bad enough, emotional devastation land at her doorstep, as well. Rayna became more "human" (for lack of better term) in Shift. I found myself crying on her behalf and actually wanting to fold her into my arms and take care of her. Now, that's not to say the girl has become a softy, no way. She is still quick with a retort, or a slap, if needed!

As for the storyline that unfolded in Shift. I couldn't even begin to cover it. I finished Shift two days ago, and am still reeling. Here's the deal. I'm not trying to brag, but I am very good at guessing what will happen in a story. It doesn't matter if it's a book, a movie, a television show, I am all over it and can predict what will happen no later than halfway through. I credit that to my soap opera upbringing. Predicting those story lines is insanity, and super fun. But back to the story. The Protector series has spun into directions I never would have imagined when I read Exiled last summer. I thought this series would be strictly the story of a young man's struggle to prove and redeem himself, while ridding the world of a few bad guys.

And it is that, but also so much more. The Protector series has become more developed and covers a broader spectrum than I could have ever imagined. There is a complete sense of world-building, the feeling that Merrick knows these characters through and through. That he has every little element of the worlds the series spans so thoroughly thought out and plotted, that you will not find those little mistakes or pieces that feel patched together you sometimes find in such a broad urban fantasy. Merrick seems to literally have all of his bases covered.

Shift took what was a nice beginning of an epic tale and blew it wide open. From the jaw dropping opening that had me cringing and clutching at my chest, through the energy packed (and very often, funny) plot, all the way to the ending that had me cheering and feeling as if I were teetering at the edge of a cliff, Shift has it all. Merrick has evaded the "sophomore slump" and has delivered a book that will have you devouring your book and wanting for more.

" 'I've got no time for a demanding child and his girlfriend. Stand down.'
'Does this look like the army? This is my house, not your backyard, so don't try marking your territory here.' " (ebook, 26%)


ebook, 1st Edition
Expected publication: February 1st 2012 by M.R. Merrick
Author MR Merrick is giving one lucky reader a Shift ebook. To enter, all you have to do is leave a comment. I will choose a winner on Monday, February 6, 2011. Good luck!
The winner of the SHIFT Giveaway is:
M.E. Franco!!
Congratulations! I hope you enjoy Shift as much as I did!﻿
* I received an eARC of SHIFT, in exchange for an honest review. *
Unknown at 10:31 PM
Share