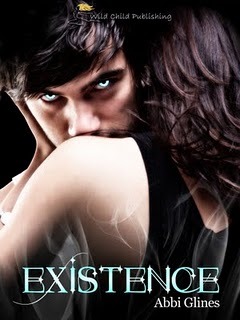 Seventeen year old Pagan Moore, has seen souls her entire life. Once she realized the strangers she often saw walking through walls were not visible to anyone else, she started ignoring them. If she didn’t let them know she could see them, they left her alone. Until she steps out of her car on the first day of school and sees an incredibly sexy guy lounging on a picnic table, watching her with an amused smirk on his face. Problem is, she knows he's dead. Not only does he not go away, when she ignores him he does something none of the others have ever done; he speaks. Pagan is fascinated by the soul. What Pagan doesn’t realize is that her appointed time to die is drawing near and the wickedly beautiful soul she is falling in love with is not a soul. He is Death and he is about to break all the rules.~From GoodReads

If you have followed my reviews, you know that I love Abbi Glines' writing. When I learned she was venturing into the world of young adult paranormal, I was so excited to see what she had in store for her fans.

Existence was a cool, mysterious book. I say cool because Glines' books are always chock full of funny, endearing characters. Pagan was sweet, smart and a little sassy. A character you can get behind and root for. Her friends Miranda and Wyatt were there to lend comic relief, a must-have in my opinion. The two guys in Pagan's life, Death (or Dank, I don't know which name he likes to go by!)and Leif, both had swoon-worthy qualities, and both could be a little infuriating, also a necessity.

I don't think I'm being spoiler-ish (it's in the synopsis) when I say that obviously Pagan and Death (aka Dank) are the couple meant to be together. But honestly, I liked her with Leif just as well. He was a truly great guy, by all appearances.

As for the mystery, Existence has plenty of it. From the very opening, when Pagan notices a mysterious boy watching her, a Soul she can actually communicate with, to her trying to understand why he is in her life, his purpose, it's an intense ride. I'm still not quite sure I know what was going on! And, wow, I really would like to pick Glines' brain and get the answer to the biggest mystery of all, the VERY LAST LINE OF THE BOOK! That line is a real jaw-dropper that caught me out of the blue, didn't see it coming at all.

Existence is a solid beginning in what I am assuming will be a series, because with that type of ending, there has to be more. I can't wait to see what's will happen next.

Favorite Quote:
"Mr. Brown glanced up once more with a slightly annoyed expression on his face, 'Gentlemen, if one
does not study the words of famous romantic poets how will one ever learn to woo the woman they
will one day love? I can assure you that P Diddy has no words on instruction in his lyrical creations.' "


ebook
Expected publication: December 13th 2011 by Wild Child Publishing
* I received a copy of Existence from the author, in exchange for an honest review.*
Unknown at 12:18 AM
Share