Review: When Tommy Adams Burned the World: Part 1 Into the Province

"When Tommy Adams Burned The World: Part 1, Into The Province" is the first part in a six part series.
Follow the adventure of Tommy Adams, a boy with magical powers, dropped into the fantastical land of The Province. Chased by zombie pirates, an alchemist and the fairy prince's Knight and his page, Tommy has to figure out why the Daemons that own his soul have sent him there all the while staying two steps ahead of everyone.

﻿
My Thoughts
﻿
When Tommy Adams Burned the World is part one in a six-part series of short stories by Timothy Nies. In the Prologue, we are introduced to Mr. Fate. His job, I think, is to collect souls. Mr. Fate, all though evil, was a wickedly delcious character to read. He is arrogant, snobbish. Mr. Fate, comes to collect a new soul, an infant. Turns out, that infant is his great-nephew, Tommy. When Mr. Fate learns this, his cool facade drops. But he is clearly not the man in charge and once he is reminded of that, he completes his job.

Once the story begins, we are re-introduced to Tommy Adams, on his fourteenth birthday. A little backstory tells us that he has not had an easy road. As it happens, when Mr. Fate took Tommy from his parents, he allowed them to bargain for Tommy's upbringing. Each year of his life, a new clause is enacted on his birthday. On his fourteenth birthday, the clause states that he will receive the finest education man or demon can offer. Happy to enact the clause, Mr. Fate sends Tommy on his way, Into the Province.  Once in the Province, Tommy quickly encounters amazing new characters. As the story ends, Tommy has realized he must think, and move, fast if he is going to survive in the Province.

My first thought was...this is a really cool concept. Part One was a perfect, bite-sized nugget of fantastic storytelling. At only 55 pages, I zoomed through the story in no time. Tommy is an engaging young boy who is easy to root for. I was definitely left wanting for more.

Timothy Nies, the author, sent me a few illustrations of Mr. Fate.  So talented! So cool! 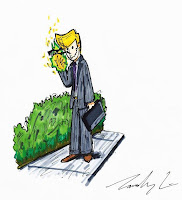 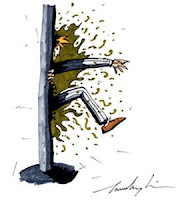 Part One: When Tommy Adams Burned the World at  Amazon.
You can learn more about the author, Timothy Nies and Tommy Adams at The Majitorium website.

*I received a copy of this story from the author, in exchange for an honest review.*
Unknown at 10:53 PM
Share